A Federal High Court in Abuja today sentenced Talal Ahmad Roda (pictured above), one of the three Lebanese men arrested in May 2013 in connection with illegal possessions of weapon, to life imprisonment. Mr Roda was arrested after a large cache of arms was found in a bunker during a raid on his residence. He was found guilty of all 5 counts of illegal possession of weapons and conspiracy. 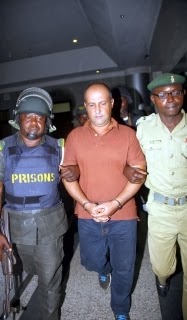 Two other men, Mustapha Fawaz, the owner Amigo Supermarket in Abuja and Abdallah Tahini, who were also charged with possession of illegal weapons, were set free by the court.